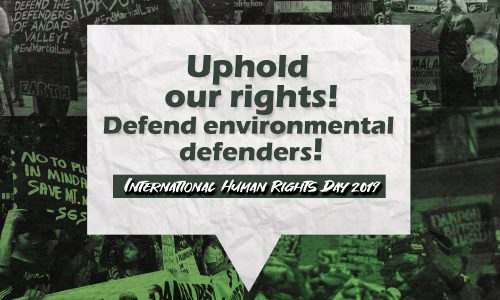 This International Human Rights Day,  the Center for Environmental Concerns – Philippines (CEC), condemns in the highest terms the continuous attacks on its organization and fellow environmental and human rights defenders and workers. On December 4, 2019, Major General Antonio Parlade Jr. of the National Task Force to End Local Communist Armed Conflict (NTF ELCAC) and the Armed Forces of the Philippines (AFP) Deputy Chief-of-Staff for Civil-Military Operations made a statement claiming that CEC, along with other CSOs are “unwittingly exploited by the Communist Party of the Philippines (CPP).”  He further advised the public not to donate to CEC in the onslaught of the Typhoon Tisoy (Kammuri).