A fisherman from Navotas presenting the resolutions and proposals they made during a workshop together with other fisherfolks from different regions. Photo by Naj Gamora/cecphilippines.org

Fisherfolk organizations from 25 provinces from 10 regions headed by the national fisherfolk federation Pambansang Lakas ng Kilusang Mamalakaya ng Pilipinas (PAMALAKAYA) echoed their call to scrap the current Fisheries Code of 1998 (RA 8550) and its Amendments (RA 10654) and push for the passing of a genuine fisheries law that puts the sector at the forefront of managing coastal resources.

The national consultation highlighted the conditions of extreme poverty and degradation of fishing grounds despite almost two decades of implementation of the Fisheries Code.

“Up to the present, the fishers remain the sector with the highest poverty rate in the country, a high contrast with the mega-diverse oceans surrounding the archipelago,” said Frances Quimpo, Executive Director of CEC.

“Many programs in the country that are seemingly environmentally sound and beneficial to fisherfolks are dominated by interests of large scale local and foreign commercial fishers. This profit-driven production for foreign consumption instead of local subsistence is causing the extreme poverty of small fishers, problems in food security to the nation and the degradation of our natural resources,” added Quimpo. PAMALAKAYA National Chairperson and former AnakPawis Partylist representative, Fernando Hicap, shared that the national consultation formed a national view of the conditions of the fisherfolks after months of local and regional consultations.

“The delegates were able to form policy recommendations as well as plans of actions for the following years, particularly on countering projects that degrade the fishing grounds, countering anti-fisherfolk laws, and conserving and rehabilitating fishing grounds,” said Hicap.

“The existing laws and programs of the government do not resolve the root causes of the problems of fisherfolks and that a genuine fisheries policy reform is needed put the interests of the small fishers at the forefront and restore their traditional role as manager-users of the fishing grounds,” added Hicap.

Just recently, President Rodrigo Duterte released a statement that he wishes to adopt the Biyayang Dagat program implemented under the dictatorship of Ferdinand Marcos in the 1970s. It was the counterpart of the Green Revolution of the administration, dubbed as the Blue Revolution. It provided fisheries loan and guarantee fund through the Land Bank of the Philippines.

“The lack of capital is not the main problem of the fisherfolks but the laws, such as the Fisheries Code of 1998 and its amendments, that institutionalize the bias towards large scale commercial fishers and foreign corporations that suck the life of the valuable marine resources and the capitalist aquaculture owners that pollute the waters and deprive hectares of fishing grounds from small fishers,” said Hicap. 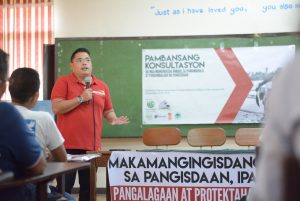 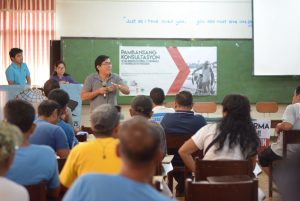 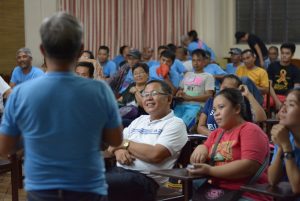 To commemorate today’s World Fisheries Day, the delegates trooped to BFAR and DENR on November 21 to demand action from the decades of neglect for the welfare of small fishing communities and their fishing grounds.

“There is not even one law that addresses the real problems of small-scale fisherfolk. We are pushing for a genuine fisheries policy reform that will address the roots of our problems,” added Hicap.

“We are one with small fisherfolk communities from other regions and other countries in celebrating World Fisheries Day. This day is an important reminder that it is high time to change the way we manage our fisheries. Our coastal and marine resources can only be rehabilitated and sustained when fisherfolk communities, scientists and environmental advocates should work together and ensure that its protection will primarily serve the interests of the small fishers and the local industry,” added Quimpo. ###